We Don't Do Dead People

Walk! Don’t Run! The Zombies are taking over our books shelves and big screens. You really can walk, zombies don’t move very fast.

Zombies flicks and books have been around forever. 700 BC’s Mesopotamian hit, The Epic of Gilgamesh is an epic poem where the Goddess Ishtar promises the undead to rise up and eat the living. You have literary giants like Poe, Mary Shelley, and King weaving tales using entrails. More recent authors like Jonathan Maberry, David Wellington, and Phillip Pullman are fresh and fleshy masters of the genre, garnering spots on many bestseller lists.

I (Charli) really can’t get into the zombie genre. Even if it’s a well written piece of prose all I will think about is when will the body parts start falling off and when will the brain eating commence.

I (AJ) really have a phobia of Zombies. They scare the sh*t out of me. My first real taste of the brain eating ghouls was 28 Days Later ... quickly followed by every other zombie flick that my husband could get his hands on. Oh god, every time I heard a bump in the night, my overactive writers' imagination would jump into overdrive.

And why would I read a book that meddles with the perfection of Austen? My brother gave me a copy of Pride & Prejudice For Zombies. I scoffed at the notion, for a few reasons, but decided one night when I had nothing left to read, meh, I might as well give it a try.

“It is a truth universally acknowledged that a zombie in possession of brains will be in want of more brains.”

Whilst Jane Austen die hard’s just might vomit from the moment they read the first line, anyone with a sense of humor will chuckle at this tongue in cheek impertinence that author Seth Grahame–Smith employed in adding a subplot of ‘unmentionables’ (zombies) to this classic Regency novel.

Whilst about 85% of the writing is done by Austen, Smith’s transitions are seamless, satire at its best. The plot does not deviate from that of the original Pride and Prejudice, with the exception, of course, of the added zombies.

As the story unfolds, a strange plague has stricken England; the dead are rising from the ground. Feisty heroine Elizabeth Bennet and her sisters have been trained in the deadly arts as zombie fighters, sworn to purge the countryside of the unmentionables, however, she's distracted by the arrival of the proud and haughty, Mr. Darcy.

Smith explains, “It’s not a parody, because it wasn’t my intention to make fun of the original. Pride And Prejudice is a brilliantly written book by a brilliant author, and all I wanted to do was give its themes and characters an absurd canvas to play out upon."

“Many of Austen’s characters are rather like zombies,” he continues. “They carry on single-mindedly in their bubbles of immense wealth and privilege, no matter what’s going on around them. They pride (sorry again) themselves on discipline and politeness and repression and subservience. These people simply carry on with their gossip and romances and manners and balls, despite the fact that people are being gored and eaten alive.” 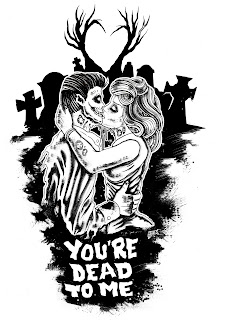 Now whilst there is no romantic lead ,i.e. a zombie vying for the heart of one of the Bennet sisters, there are tales out there casting these unmentionables as leads. Seriously? We can take them being monsters and bad guys but heroes and romantic interests? GROSS! No nooky with yucky zombies! What if it falls off, you know, um, during sex? What if you swallow their tongue? Can you get VD? Preggers? Ewww. Must stop now, we’re getting nauseous.

What’s next, a Highland Epic Historical Romance about William Wallace limping around in a kilt looking for a wee lil’ lassie to come hither and help him put his bits back together? A Rotting Rogue seducing a brainy courtesan? We certainly hope not.

I (Charli) told AJ about a local author Jonathan Maberry, a Bram Stoker award winner. His novel Rot & Ruin, and Patient Zero is all about the ghoulish fiends. But they remain that, monsters to be exterminated. AJ actually read them. Could not put them down. Devoured them like a zombie would brains. The lassie will be chatting it up with Maberry soon enough.

I (AJ) am terrified of the decomposing dudes. But this book below, and Rot & Ruin, were both non-stop horrifying page-turners. As horror books should be. I HATE ZOMBIES and could, not, stop, reading.... like a night crawler possessed. Zombies are not heroes or romantic leads. Yuck.

All this jibber jabber about the ghastly ghouls reminds me (Charli) about that movie in the 90’s. The one where the dead kid comes back to get the girl and take her to prom, My Boyfriend’s Back. The only Zombie flick I could stomach. This wasn’t so bad but I still kept thinking about the logistics of dating a guy whose flesh can fall off at any moment. BTW, this movie totally has a hot and fresh and very alive Matthew Fox looking oh soo friggin’ foxy. Ha-cha-cha. Another surprise is Matthew Fox’s villainous side-kick, a very young Phillip Seymour Hoffman. What would Capote say to that?

Hmm, Tiffany for Breakfast could be the next mashup! Someone call Philip Seymour Hoffman and tell him to summon the long dead scribe and get on it. Then he can star in the film version of how a Zombied out Truman Capote rose from the dead to write his latest masterpiece. Not sure what grosses me (Charli) out more, a dead Capote writing such a tale or Hoffman playing a zombie Capote.

Bottom line, we don’t do dead people. Literally, in film, or by the written word. Gross!

Did you know that according to Wikipedia that Zombies are now competing with Vampires for popularity as the number paranormal entity among the masses? Imagine that as a YA book. Dead Vampy High. AJ may actually read that. Someone please get typing.