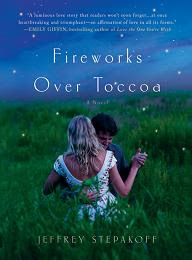 Sometimes you pick a book and sometimes a book picks you. This has been happening to me a lot lately.

I mean, just look at this cover. A beautiful starlit sky. A beautiful couple dancing. The slight smile on the man's face, the gentleness in which he seems to hold her hand, how his palm presses against her back- keeping her close. Can't you feel rustle of their hair, the heat of their cheeks touching... I can.

And that's just the cover. Jeffrey Stepakoff's words reached out from the page and held me fast, each passage captured my heart, and left me profoundly changed. This love story, and the true story that inspired it all, will remind you that everything does happen for a reason. That who we are today is the culmination of all the paths we've embarked upon and those who journeyed along with us.

Every so often a story comes along that reminds us of what it’s like to experience love for the first time – against the odds, when you least expect it, and with such passion that it completely changes you forever.

Lily Davis Woodward was married for just days before her husband was sent abroad to fight in WWII. Now, he and the other soldiers are returning, and the small town of Toccoa, Georgia plans a big celebration. Jake Russo, a handsome Italian immigrant, also back from the war, is responsible for the elaborate fireworks display the town commissioned. After a chance encounter on a starlit field, he steals Lily’s heart and soul- and fulfills her in ways her socially minded, uper class family cannot.  Torn between duty to society and her husband- and the poor, passionate man who might be her only true love- Lily must choose between a love she never knew and a commitment she'd already made.

Poignant and elegant, Fireworks Over Toccoa is a mosaic of all the emotions that only love can make possible...

Jeffrey had me at World War II and a love story. Throw in fireworks and 4th of July and I was sold. See, me and the hubby's anniversary is the 4th of July so the holiday and the thought of brightly colored skies makes my heart go pitter-patter.

Emily Giffin, Bestselling Author of Love The One You’re With, even praised this heartfelt story, “A luminous love story that readers won’t soon forget, Fireworks Over Toccoa transports you to another time and place. It is at once heartbreaking and triumphant—an affirmation of love in all its forms.”

The book opens with a couple of boys playing near a resovoir. They find something in the murky waters that has not seen the light of day for decades. When the historical society displays the artifact in the local paper, the original owner cannot believe its resurfaced after all these years. It brings forth a rush of memories that cannot be contained. An elderly Lily sets off with her granddaughter Colleen, to reclaim what is rightfully hers. A granddaughter she believes is about to marry the wrong man. Along the way she can only hope to show Colleen that there is no such thing as the perfect man or perfect life. Lily hopes that by sharing her past Colleen will make the right choice for her future.

The passage below is after Lily meets Jake in the field where he is setting up the fireworks display. Lily sees a burst of color in the sky and gets out of her car to investigate. She walks, unknowingly, to where Jake is testing the fireworks. He rushes to her, pushes her to the ground and covers her from an explosion. After he helps clean a wound on her knee he realizes he doesn't want her to go.

Jake realized that Lily was shaking her head. "You okay?" he said.

"I'm just remembering, I've got a trunk full of ice cream and butter."

Lily realized her groceries were probably ruined. "I'm not usually like this. Really. I don't know what's wrong with me today."

Jake laughed. Incerasingly certain that he was seeing a part of this young woman that very few ever saw. A part she kept carefully hidden, maybe even from herself. And he liked it. He liked it a lot.

Jake had learned during his time at war that there are moments in one's life, critical moments, small moments, passing flutters of a second, in which decisions are made and actions taken, perhaps the slightest of offers extended, that the time on the surface seems simple and transparent but upon consideration or reflection are proven to be instants that can change the course of everything.

As she stood there in her sandals in that field, smiling comfortably at him, an evening breeze kicking up, tossing her hair, rippling her dress, the feel of  the skin of her leg rooted in his mind like a lovely haunting melody, growing louder and more resolute each time he tried to forget it, on a level that he was not wholly aware of at the time, this was one of those moments. It could have ended there, Jake knew. There was nothing else between them, and the last thing he needed was a complication. He was decidedly avoiding such things in his life. That was one of the main reasons he was here after all. Say goodbye, wish her well, do the show, and move on to the next town, he told his conscious self.

But after several years living by his gut, literally surviving on what it directed him to do, he once again found himself acting on that core instinct. "Would you like to stay for dinner?" he asked. "I don't have much. But there's some risotto, and I'm not entirely bad with my little camp stove. And I suppose we could have ice cream soup for dessert."

Lily was a little taken back by the offer. But she continued standing there. "You saved my life, you bandage my knee, I can't have you feed me, too. The Ladies Auxiliary will throw me out of Toccoa for being such a poor southern hostess."

How long had it been since she'd been invited to dinner, to anything, by someone besides her parents or someone who was connected to her parents? Dinner. More time with this man. Yes. That was exactly what she wanted. Was it okay? Was it proper? Was it right? She didn't know. But she was in the middle of a grassy field and the sun was going down and Jake Russo had been nothing but nice and kind and interesting, and all she knew for sure was that she wanted more. And that, that certainly felt right.

Later, Jake opens up to Lily about his experience over seas and in battle.

For the first time, Lily got a glimpse into what Jake Russo had been through, what hurt him so deeply and caused him to wander cross-country without home or community. More than anything she wanted to soothe that pain, kiss away the anguish, but she dare not approach that place. She dare not battle an apparition she could not see or touch or know. So she remained silent and let instinct take over once again, running her hands through his hair. He liked that. His body was so responsive to her touch, so sensual. Could you love someone you'd known for barely one day? What if you felt that you'd known that person your whole life, even though you just met him?

"You can share anything with me, Jake. Even, that," she said as gently as a person could.

Jake inhaled deeply and closed his eyes. What could he say to her? I am sharing everything with you, he thought. Every time my chest expands with breath against yours, every time my heart beats in tempo with yours, I am sharing everything. How could he make her understand? He opened his eyes. "You asked me when we had dinner in the field if I had changed," he said. "What I've come to believe is that you have to cherish...this, the present. Life and death...it's a matter of breath, a heartbeat...a single footstep." He thought about Lorena, who had stepped on a mine in her vineyard, and he held Lily even tighter thinking about the simple timing of things. He had seen so much that was arbitrary- things you couldn't make sense of, let alone try to explain with words. He held her even tighter and tried to convey these thoughts with the stroke of his hands, the pound of his pulse, tried to pass them through his touch. "This, the here and the now, Lily, this is what you count on."

Oh sigh and super duper knee jerking sigh. Want to know how it ends? You'll need to buy the book for that. I've already read Jeffrey's second novel, The Orchard, and am reviewing it over at Heroes and Heartbreakers. Another must read love story by this amazing author.

Here's a little background on this master of words. His bio had me worshipping at the altars of literature, screaming, "I'm not worthy..

Jeffrey Stepakoff was raised in Atlanta, Georgia. He attended the University of North Carolina at Chapel Hill where he received a BA in Journalism. In 1988, the day after getting his MFA in Playwriting from Carnegie Mellon, he drove to Hollywood where he began writing for film and television.

Jeffrey has “written by” or “story by” credits on thirty-six television episodes, has written for fourteen different series and has worked on seven primetime staffs, producing hundreds of hours of internationally-recognized television, including the Emmy-winning THE WONDER YEARS, SISTERS, WILD CARD, HYPERION BAY, THE MAGIC SCHOOL, C16: FBI, ROBIN’S HOODS, LAND’S END, FLIPPER, SONS & DAUGHTERS, MAJOR DAD, THE YAKOV SMIRNOFF SHOW, BEAUTY & THE BEAST, HAVE FAITH, SIMON& SIMON, and DAWSON’S CREEK where he was Co-Executive Producer.

Stepakoff has also created and developed pilots for many of the major studios and networks, including 20th Century, Paramount, MTM, Fox and ABC. And he has developed and written major motion pictures, including Disney’s TARZAN and BROTHER BEAR, and EM Entertainment’s LAPITCH, THE LITTLE SHOEMAKER, Croatia’s selection for the 1998 Academy Awards.

A few years ago, Stepakoff returned to Atlanta, where he lives with his wife and three young children, and began writing fiction. FIREWORKS OVER TOCCOA is his first novel. Presently, he speaks around the country, teaches dramatic writing at Kennesaw State University, and is hard at work on his second novel for St. Martin’s Press. In his spare time, he builds forts in living room with sofa cushions.

You can read excerpts of both Fireworks Over Toccoa and The Orchard at http://jeffreystepakoff.com/

Happy Birthday Jeff!
Posted by Unknown at 6:00 AM