Glad Someone Read To Me, The Outsiders 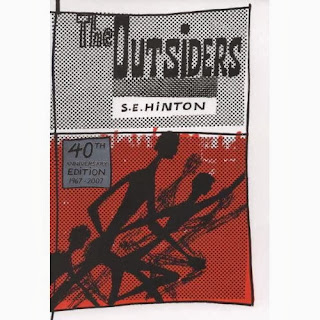 Today there is an event called, I AM GLAD SOMEONE READ TO ME. It's on Tumblr and Twitter using, #GSRtME. I'd like to share with you my story.

When Sister Edward William read the words, “When I stepped out into the bright sunlight from the darkness of the movie house, I had only two things on my mind: Paul Newman and a ride home,” I was hooked. It’s not easy getting an entire 8th grade class to pay attention but we did. We were all hooked by S.E. Hinton’s words, about kids our age from another era but who felt so much like home. The kids from the wrong side of the tracks, outcasts, misfits, poor, and with the weight of the world against them. I grew up two blocks from the Philly elevated train, in a neighborhood known for drugs and prostitution. Kids from a richer neighborhood also went to my school and it always seemed like it was us against them. Soc vs. Grease was a battle I knew well.

I knew kids that came from broken homes and often wandered the streets like Johnny. I knew kids like Dally, angry at everyone and the world. I knew class clowns and thieves like Two-Bit, dreamy drop outs like Sodapop, hardworking kids made to be adults too soon like Darry, and I knew too many kids taken from this world far too soon. Ponyboy was my kindred spirit. A kid who didn’t fit in anywhere. A kid who liked poetry and books. Sunsets and movies. A kid who wanted so badly to be accepted by his hood-rat peers but wanted so much more out of life at the same time.

It was here, where a passion ignited inside of me to write about broken characters, pained by life, but determined to keep their head held high and carry on. Sister Edward gave us an assignment afterward, to write the beginning to a novel of our own, about kids like us, much like S.E.Hinton did at the age of sixteen. My story was titled, Stay Gold. Not very original but it became a fan fiction of sorts. A story where a boy like Johnny lived to see a better life and where a boy like Dally found the beauty in a life worth living. A story where everyone got their happy ending. I couldn’t re-write my own family history, where my brother lived and my family wasn’t forever fractured by the loss. But I could write about kids that survived the impossible. Defying the odds thrust against them on the hard concrete streets of a neighborhood long forgotten.

I am so glad Sister Edward William read the Outsiders to me and my class. I wouldn’t be who I am today if not for the words of S.E Hinton, “Stay gold, Ponyboy, stay gold…”
Posted by Unknown at 5:12 PM