I'm not so perfect with PAST PERFECT~GRAMMAR GRIND 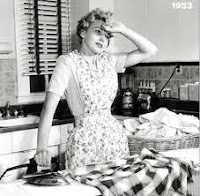 I'd rather iron than brush up on my grammar. I'd rather be domestic. I am not that domestic. This is how much I hate GRAMMAR. But the judge from that contest is still in the back of my mind. "Once you get a better understanding of the English language..." Whatever, so here I am, learning with you.
Apparently when you write in the third person, I do, and your character recalls something they did in the past, you need the tense of the verb in the sentence to be PAST PERFECT. As soon as I heard that I cringed. VERB TENSES. This was the part of class where I'd raised my hand to go to the ladies room and check out my hair.
I had some eye opening crits when I started this whole writing thing and realized something. Somehow I mistook being PASSIVE for PAST PERFECT. I was GRAMMATICALLY INCORRECT.

I still struggle with PAST PERFECT as I write but at least I am conscious of it now. Grr, I hate grammar!

So, what I have been doing is READING. Not for pleasure but for research. I came across an excerpt in Domestic Affairs by Eileen Goudge. A great read BTW. Here PAST PERFECT made a little more sense to me.  (Below this passage you will find a text book grammar lesson. YAWN but necessary.)

Here is the best lesson on PAST PERFECT I found on the web. For me it was the easiest to understand. I will post other links at the end of this post. The lesson is below.
http://www.wordpower.ws/grammar/gramch06.html

e.g. She had heard the news before I saw her.

I had finished my work by the time the clock struck twelve.

The Past Perfect tense is formed from the Simple Past of the auxiliary to have, followed by the past participle of the verb.

The Simple Past of to have is had. In spoken English, the auxiliary had is often contracted to 'd. For example, the Past Perfect of the verb to work is conjugated as follows:

I had worked- I'd worked
you had worked -you'd worked

he had worked -he'd worked

she had worked -she'd worked

it had worked- it'd worked

we had worked- we'd worked

they had worked- they'd worked

The contraction it'd is less frequently used than the other contractions, since it is more difficult to pronounce.

As is the case with other English tenses, questions and negative statements in the Past Perfect tense are formed using the auxiliary.

Questions are formed by placing the auxiliary before the subject. For example:

I had worked. Had I worked?

They had worked. Had they worked?

Negative statements are formed by placing the word not after the auxiliary. For example:

I had worked. I had not worked.

They had worked. They had not worked.

In spoken English (erm Dialogue for us), the following contraction is often used:

Had I not worked? Hadn't I worked?

Had they not worked? Hadn't they worked?

e.g. I had been waiting for two months by the time I received the reply.

He had been thinking about his friends shortly before they called.

In the preceding examples, the verbs had been waiting and had been thinking are in the Past Perfect Continuous tense, and the verbs received and called are in the Simple Past. The use of the Past Perfect Continuous tense indicates that the actions of waiting and thinking were continuous, and were completed by the time the actions expressed by the verbs in the Simple Past took place.

\OKAY, I am confused but no longer so lost, if that makes sense. YOU GRAMMAR GURUS OUT THERE, PLEASE CHIME IN. I NEED YOU. Eh-hem. Especially, if all this is wrong!

Other great links on PAST PERFECT:

Email ThisBlogThis!Share to TwitterShare to FacebookShare to Pinterest
Labels: Grammar