Please tell me...WHO IS THIS GUY?

I use Google Images for my blog posts. I love finding funny and intriguing photos for you to check out while reading my musings.

Sometimes I come across an image that makes me wonder. Like, who are these people? Then I think about what kind of character they could be.


Below is a artistic photo. You know, one of those ones where it's a photograph than drawn over. So flippin' cool.
The man's face intrigues me. I wonder what he is  thinking about while taking a drag of his cigarette. The band aid on his finger tip, his face etched with wrinkles, a cool ponytail of salt and pepper hair, and his workman's uniform are all tell tale signs of what kind of life this man leads. So, I made up a character and a scenario. You can do the same. 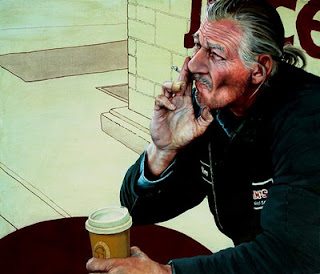 Dimitri Petrov is fifty-nine years old. Russian by birth, he became an American citizen in 1962.
He married his hometown sweetheart, Ana. They have been married for forty years and have two children, a boy and a girl.
He has worked in his cousin's auto body repair shop for the past thirty-five years.
To most, he has lived the American Dream. If they knew what secret he's been keeping they would agree whole heartedly that he IS the American Dream.
Dimitri would disagree with the same fervor.
He thanks God everyday for Ana's laryngectomy a year ago. The sound of her voice used to induce instant nausea. Cause of its tone? No. She nagged him incessantly about how he never amounted to much of anything.
His children took after their mother in that sense. Never making much of his life. The sixty hour work weeks to put food on the table, send them to Catholic school and even to college. Money he could have saved.
Mikael, his son,  is a degenerate gambler who's been in jail more than out.
Katrina, his daughter, is a gold digger who's been married three times- to men older than him.
The coffee in his cup has long been finished but he can't seem to move from his seat.
He won the powerball two weeks ago and never told a soul. Technically he is a millionaire.
The whole country wants to know who the winner is.
And he doesn't want to give his ungrateful brood a dime.
Will he cash in and leave Detroit forever?
Thus giving his wife and offspring their shares and be done with them?
Or will he keep the ticket in his wallet, basking in the ways their lives will continue to be miserable. Miserable not because he is withholding riches from them, but miserable for the types of people they really are. With the money they would still be rotten children and she still would be a rotten mute wife.
At some point the ticket will expire. He envisions leaving it for them in his will. Laughing from his grave.
With a drag of his USA 100, he makes his decision. One they will have to live with, not him.
I challenge you to find a picture that speaks to you and do the same.
Posted by Unknown at 4:17 PM