The Lost Art Of Reading Books...From An Acutal Bookstore

My local Borders is closing here in Philly. And when I say local I mean across the street from my job and when I say Philly it's the only Borders left in this great metropolis.

The only Borders in a major city is closing.  What the what?

I feel like Meg Ryan in You've Got Mail but the crappy closing is happening to Tom Hanks. The big box store is closing. Not a mom & pop shop.

Does this mean Mom & Pop book stores can make a comeback? That would be nice. But if the Big Boys can't hang how can the little guy?

I am sooo bummed. Yes, part of it is proximity. It is literally across the street from my job. But B&N has  never been a fave of mine. I thought the peeps in there weren't as friendly and even the customers seemed uptight.

In my Borders everyone says hi. The chipper cashier who makes sure you have the latest coupon, the stock person who gets off their ladder and asks if you need help even when you didn't, the super high maintenance executive who is secretly reading a romance novel in the corner, the dirty hipster next to me in the Lit section chosing between a Pulitzer and a comic book, the mom with the frazzled hair checking out couples only vacation books, and the cute guy buying a cook book to whip up a feast for his love. I mean we were all there together, seeking... BOOKS.

This store is  always busy. It's in Center City and all kinds of peeps chillax in this wonderful building filled with ACTUAL BOOKS.

I do not own an e-reader. Do not want to, in the least.

I have bought three books from Amazon. But they were reads not available at Borders.

There have been so many great stories I've found just by perusing the bookshelves. Titles, covers, and displays have caught my eye. I have found reads that were maybe the last copy there, not so popular to be on a display, but they were truly beautifully written pieces of prose.

You cannot get that at Amazon.com.

You can't get that from some App or Kindle site.

The written word is losing its biggest cheerleader, advocate, sponsor, and guardian.

Didn't you get the feeling when aimlessly wandering the aisles that they were calling to you, whispering for you to ... "Read me..."

Maybe it's just me. But I have the feeling I am not alone.

Liz Lemon's latest adventure had her fighting for the written word. This, BTW, had to be one of the funniest 30 Rock episodes ever. EVER! Anywho, as a writer her show was sent on Hiatus. Even for TV Show Writers the business is grim. Liz's greatest competition is a reality show. No writing there, no scripts or thought to the words used to inspire people to watch. Just a camera following an idiot around. (I do love me some Real Housewives of Atlanta and Jerseylicious, though.)

Liz's agent sets her up to interview For Nick Lachey's Sing Off and Aaron Sorkin is there too. Not a good sign at all...

Liz: You're not really applying for this job are you?

Aaron Sorkin: Of course I am, you gotta take work where you can find it, especially now. Our craft is dying while people are playing Angry Birds and poking each other on Facebook. What is poking anyway? Why won't anybody do it to me? Hey, I'm cool.

Liz: So it's really that bad out there? I mean, you're Aaron Sorkin...

Liz doesn't get the job and is desperate not only to work but to save writing as an industry. Walking home she overhears a child ask her mother what the metal box is on the sidewalk is. A homeless man says it's a toilet, a woman, whatever you want it to be. It's a newspaper stand. Liz will not let the little girl be led astray.

Liz: People of the sidewalk we can't give up on the written word. We need stories. Because I don't have a plan B. I have a degree the Theater Tech with a minor in movement. Why did my parents let me do that?

She stumbles upon some "peoples whose professions are no longer a thing"; an American automotive worker, a travel agent, and a jazz saxophone player. Liz has had enough. She will not join them living in the tunnels of NY.  Through the genius detective work of Kenny, Liz saves the show. 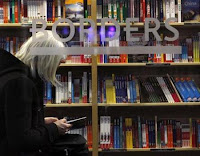 But I don't have a Liz Lemon or a Kenny. No one can save my bookstore.

Who will save bookstores? Who?

You, that's who. Stop your amazoning kindle fondling and get back into an ACTUAL BOOK STORE.

You may be reminded why the hell you started reading in the first place.

Don't you want to inhale that new book smell, feel the paper across your fingertips?

If you don't this will be me years from now. A ghost in a  museum where those things with pages and letters are held. The place where books went to die.... 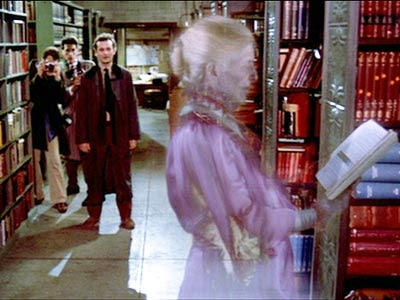