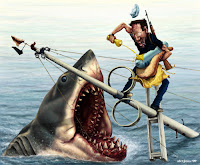 "AJ is a straight shooter from Toronto, Canada. The nickname JAWS comes from her innate ability to tear a person's writing the shreds and leave a trail of blood behind ..." Charli Mac


Welcome, lads, lassies. Pull up a chair, get comfortable. I hope you haven't eaten ... yet.

How many of you would go streaking? Shed your clothes, run stark arse naked down the street. Maybe you’ve had a few drinks and your friends were doing it, or maybe you just love to shock.

Aye, in my youth I was known for such stunts. There. My secret is out. But shh, don’t tell my husband, he thinks he married a nice girl!

Critting is a very similar experience. You’re completely naked, vulnerable. Trepidation runs down your spine like a cool wind. At first, you might think, bah, my story is perfect. I’m ready to publish. Think again.

I know the first time I received a heavily scrutinized crit, I huffed and puffed, in complete denial. This person obviously didn’t grasp my premise. They don’t know what there talking about.

Or did they? If they’ve been around the block more times than you, good chances are you ought to listen to them. I went kicking and screaming, Charli threatened to bring in her leg breakers, but in the end, after we’d shaken away pesky denial, we accepted that critting only serves to make us BETTER.

When I joined my first critique group, I was a bit overwhelmed. I perused through all the stories posted, and ta-da, BY GRACE ALONE was the first one that jumped out at me. Why? AJ shrugs, I liked the name Grace.
Each week we're going to take the first page of someone’s MS and toss it into the SHARK TANK. I’ll get first crack at feeding, then everyone else can join in. This week we're going to look at Charli’s first page – remember, I’ve bled the sh*t out of it.

This is an older version. I want to see what YOU think of it. And, next week, after a collaborative effort, I’ll post the final version, along with my next victim.
And, yes, I’ll even toss my MS up here for Charli to bleed, lord knows she likes payback.
AJ
The South Jersey Shore
Miguel eased back into the Adirondack chair. He glided his fingers over the smooth oak finish. His own work, crafted with bare hands, comforted him. Summer light warmed his face. Shoulders usually tense from worry lowered and he stared ahead wondering what memory he would drum up first.The chair, the view, and his thoughts relaxed him.
The summer of kites.
He was nine and Grace eight. The day her purple kite finally flew high in the air, soaring into the sky. The joy on her face as it kept going, the string unwinding without an end in sight. “Look Miggy look!”
A glare hit his eye, daydream interrupted. The sun’s rays bounced off the gold band on his finger. He twirled it around hoping that one day it would feel like it was a part of him, not a prop or show piece. He fisted his hand into his pocket.
On a deep inhale he let the salt air fill his lungs. The crashing waves beat upon the sand and its rhythm lulled his heavy heart. With closed his eyes he let his mind wander again . This place, this beach, held all of his secrets - a past long gone. Of a love that only happened once in a lifetime. It never failed to amaze him how a visit here provoked memories better left buried. Dreams of something that would never be.
He basked in them, looked forward to recalling each and every moment. It was here he cheated on his wife every week, not with his body but with his heart. In this chair he would sit and remember. Remember their friendship, their love. Some days, if it was quiet enough, he could start from his first memory of her at age five and work his way up to the very last moment he saw her, when he let her go.
Here's my take: there are several awkward sentences, that, if fused together as one, would flow better. Starting the first chapter with a flash back doesn't quite give me the action I was looking for. Tons of tell and little show. I LOVE show. Was I hooked? Not so much. Harsh eh? Probably, depending on who you are. But, and this is a big BUT, the reason Charli and I mesh so well is because we are BRUTALLY HONEST with each other. If something sucks, one will tell the other.

So what's going on here? What do you know about the characters? Do they draw you in? Peek your interest? Is there a good hook? What would you change? Lets get this ball rolling - tear the shi*t out of this. I did.

Email ThisBlogThis!Share to TwitterShare to FacebookShare to Pinterest
Labels: Critiques