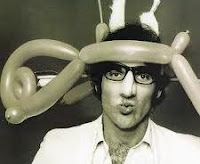 I wish I could be so cool. So accomplished. I have a new idol and I've been a fan of this guy, since forever. But now, after watching a recent interview, I am left in sheer awe of his artistic accomplishments.

An American Icon. The guy who's had white hair ever since I can remember. But he never seems to age.

A comedic genius. The creative equivalent of a Trifecta. A triple threat if you will.

My three fave roles of his: a waiter in The Muppet Movie, Lucky Day in The Three Amigos and he sang and danced  in Little Shop of Horrors as a Dentist. The man also played a Jerk but if you've ever seen him in an interview he is anything but.

He can list three Grammy's for his comedic performances but, to your surprise, he also has two Grammy's for his music. Yes, his original music. And it's Bluegrass and the instrument of choice....the friggin' BANJO!

The epitome of cool. 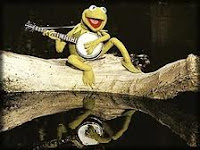 Yes, I said the banjo was cool. If you disagree then you are an L-7 loser. The Banjo is cool and this guy proves it. Kermit tried but only got so far. This guy will have the tweeners ditching their Beiber Bobs and grabbing a 5 string BANJO. Just wait, it will happen.

Who, who is this man you ask? And did I just hear you say 'so what' about having comedic and musical accomplishments? You forget where I'm from. Philly. And I gots me some legbreakers. So shut your cake hole and give the man some props.

There is further evidence that this artist is one of the greats, I mean all time GREATEST CREATIVE and ARTISTIC LEGENDS of our time.

He is also an AUTHOR. The author of two novellas and a recent novel. He also has a memoir, short stories, and children's books published. Oh and besides that he writes his own music for said awesome banjo and of course has written for TV, the Stage and Silver Screen. You  may have seen one of his novellas on the big screen. You may have even read them.

As much as I am a fan of his acting, I can honestly say I've never read any of his works. I've only seen his  Banjo strumming skills on American Idol. And YES, the Banjo was kick ass. 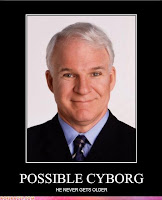 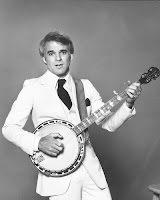 You read it right.
Steve Martin.
I came across his interview on Charlie Rose the other day. I was channel surfing about the latest hub-bub in Korea. Charlie interviewed David Sanger from the NYT and asked me to stay tuned for Steve Martin for his latest....what...novel?
I totally forgot he wrote Shop Girl. I'd heard he wrote children's stories but my tweener only reads about sparkling vamps and six-pack-abbed werewolves. But being an aspiring scribe I stayed tuned as Charlie asked. Why not, right?
Steve Martin talked of his writing with such purity and grace. He mesmerized me. The comedian dissipated and all that remained was the writer, the author. The interview had me nodding, yes, the entire time. Yes, Steve, I get that. He discussed with Charlie about how he chose the POV for his latest novel, Object of Beauty. You can see the spark in his eye as he describes his characters.
Charlie asked him to read an excerpt and I was pulled in. His voice, his writing voice, is fresh -a natural story teller.

He is a writer, as Charlie Rose points out. A writer in all things.

A writer of screen, instrument, and word. I felt humbled just to watch this interview. They way he spoke of his approach to writing and getting to know his characters, where they come from, I just kept nodding my head. Yes, Steve, I feel that way too.
Since then I've been thinking about my own writing. I wrote a few posts ago that there is a shift happening for me creatively. My characters have been speaking to me and I think I am finally getting the message.
And for it to be channeled through Steven Martin is kind of ironic. Sitting here, jabbing at these keys, it's all come full circle.


My story, the one that's been out there in query land praying an agent bites, is taking on a new life. I think it keeps getting rejected, even my partials, for a few reasons.  I am not supposed to tell their story the way I have it now. My first MS is focused on a romantic relationship with a family saga as the backdrop. 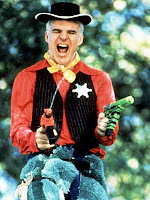 I keep toying with the idea of introducing this ensemble cast of characters years before, when a family tragedy occurs. As I was watching one of my favorites shows the other night, it hit me. This is what I want my story to read like, Parenthood. Great show if you haven't watched. There you invest in the family as a whole. Each episode has a family problem to focus on. My MS can read the same. Where you are invested in the ensemble, the love stories won't be the sole focus. I love this show and I loved the original movie. The one starring, none other than, Steve Martin.

Cha-ching. And it all comes full circle.

I am currently reading four books. All different and I love them. I put Shop Girl and Object of Beauty on my Christmas list. The hubby always gets me a book or two.

So, after all this, this is where the post ends. It began as an homage to the ageless scribe of wonder and ends with him inspiring, in a round about sort of way, the direction I am headed as an aspiring scribe.

And if I had a banjo I'd be strumming the hell out of it now but I don't. So, I'll just sing of my all time fave songs of his. King Tut. This one's for Steve.
King Tut (King Tut)
Now when he was a young man,
He never thought he'd see
People stand in line to see the boy king.

Here you can find out more about Steve. http://www.stevemartin.com/
Below is a list of accomplishments, as noted in wikipedia. 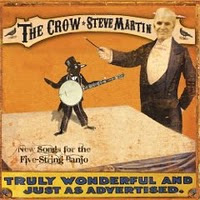 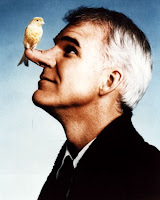