If I've never told you, one of my favorite shows is Flight of the Conchords. 'Tis an HBO series that follows the misadventures of two New Zealand musicians on a quest in New York to hit it big in the music world. They sing terrible songs, have minimal talent, and suffer from a severe case of naiveness and idiocracy. 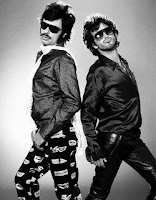 However, in their minds they are legendary.
It got me thinking, especially since I am not writing, what about a tale of two writers trying to make it big in the Big Apple? Plight of the NoWords...documenting the daily struggles of  BJ & Harley, two aspiring writers.
They risk it all and flee to NY to pursue their writing dreams. Can you imagine the shenanigans and tomfoolery they could get into? The possibilities are endless. 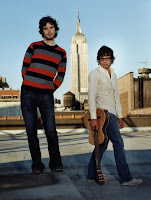 Not familiar with Flight of the Conchords? Geesh. I cannot be responsible for your pop culture shortcomings. Where have you people been? Really. Please click on the links and get better acquainted with Jemaine and Bret. And yes, it's JEmaine not JeRmaine.
An introduction if you will, the best of the first few episodes.

Here, the boys dabble with becoming rappers and believe their gansta personas will ward off muggers.


BJ and Harley have just arrived in New York and will make their debut this week. Stay tuned.