They would meet from a great distance. Two aspiring novelists hoping to make it big in the publishing world. Both with big dreams, light wallets and little sense...


Plight of the NoWords
Chapter 1
An Officer and a Cigarette

Harley tapped her feet, the hard plastic chair squeaked. In just a few minutes she'd meet her critique partner. BJ was traveling from a far, far away land, called Canada. Harley hoped she arrived in the United States okay. Who would've thought that two random strangers meeting on the interwebs would finally meet in person. How often does that happen? Harley knew they were pioneers in a sense.

Harley left her life behind in Philly by boarding a NJ transit bus here, to Newark International Airport. Like all struggling artists, they'd have no car. Together they'd enter the city and take it from there. Nothing but a few bags, laptops, and dreams.

Where would they sleep, who knows. All the great musicians, dancers, and actors who came to NY in movies and on TV never had a plan. Either did she, genius, huh? She thought so.

Waiting didn't suit Harley. So she people watched. Lots were reading newspapers. They looked smart too and headed for NYC, she was sure. People in NY read papers. Some people did too, back in Philly, but Harley never cared for it. Too much to concentrate on, that reading nonsense. But she was all about fitting in, so she grabbed one and sat down.

She crossed her legs and opened up the pages like the smart looking girl across from her. The office type had glasses. Dang it, Harley didn't. They'd make her look like she knew what she was doing. But she did have Jackie-O shades. The Kardashians always wear their sunglasses everywhere. And they are so, so, so smart.

She put them on and began to read. She had to squint to see but it was all about the look. Reading, reading, skimming over the big words like, inundate-mandate...lots of dates in NY. Cool.

It got more boring as she read and yawned, but she did it for writings sake. Reading and writing kind of go together, right? I mean she technically didn't have a book written yet but she had lots of ideas and that's all that mattered.

An interesting article caught her eyes. Some serial killer on the loose from... Canada? One who meets their victims on the internet?

The same INTERWEBS that brought her here, meeting BJ? Harley read in disbelief that someone else thought to use it to meet people. How rude. She prolly could've made money off that. But it had her thinking of Dexter, one of her favorite shows. It was a book before it became a hit series. Hmm, a serial killing writer...great idea!

"HARLEY!" A voice bellowed out, interrupting daydreams about being the next HBO/Showtime star!

Looking up there she was, BJ. A cigarette dangling from her mouth, unlit, but waiting. Red hair, fur coat, and hick-like stride. How exotic. "Hey, BJ, over here!" 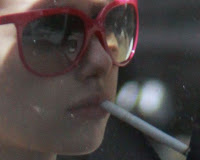 Harley lept up but wearing those dark shades she didn't see a body in front of her. At full force she fell right into something small and soft, landing in a heap above it. Said heap groaned a bit. Her shades tilted, practically dangling like BJ's cancer stick. 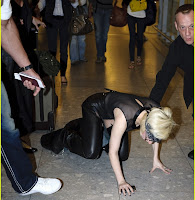 "Yo, heffer, you mind?" Some deep voice came from under her. She looked down. A round portly man lay underneath her, and his member was stiff on her hip.
"Excited Mister?" Harley fixed her shades and stood.

The man helped himself up and adjusted his shirt. It read, Homeland Security. The member was actually a gun but he was prolly a little excited she landed on her. "What friggin' idiot wears sunglasses indoors and at night?"

"New York ones." Harley winked but he prolly couldn't see that underneath her shades. So she tilted them down and winked again. Shorty wasn't impressed. He was prolly from Jersey and jealous a little. The man pushed her aside, huffing about tourists and walked away. Harley couldn't agree more. Tourists were stupid idiots.

"HARLEY!" BJ's voice found her and she was being escorted by airport guards. She turned to them, yelling. "I didn't know you couldn't smoke here. I didn't smoke the whole plane ride. You think I'm some terrorist with a bomb!"

In seconds she was forced to the ground. Harley ran, yelling, hoping to intervene. "She doesn't have a bomb, she's not a terrorist. She's from a really foreign country. She's Canadian! I'm not sure she speaks American English!" 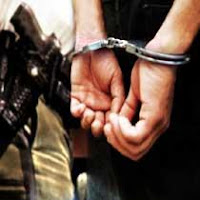 Harley felt the air leave her as she was thrown to the ground, inches from BJ's face. The cigarette was broken in half but still hung on for dear life. As Harley turned her head to look up, little man was cuffing her.
"You sure are scrappy." Harley winced as she silver cuffs tightened around her wrists. "I said she's not a terrorist. What's the problem?"
"Shut up idiot." They stood and Harley had a thought.
She bent over and whispered into the vertically challenged officer's ear. "You think she's the Interwebs killer, huh?" 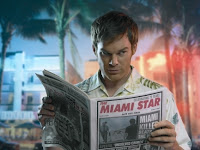 Harley caught a glimpse at BJ and the Canadian winked. "Welcome to America, eh?"

The next few hours they were questioned. Some supervisor didn't appreciate Harley's insistence about the serial killer connection or that Canada was some exotic foreign land. These guys must not have paid attention in geography class. It's called South of the Border for a reason!

Lesson 1 as an aspiring writer. You cannot say bomb or terrorist in an airport. Like really, that's stupid. Cause that episode of Jerseylicous last week was Da Bomb. For reals. And like terrorist is a perfectly innocent thing to say. Technically, the petite officer terrored-her-wrists with those cuffs. It's called word play. These guys so don't understand the craft, with writing, cause words are used in writing.

When they were finally released they hugged it out and made way to the Big Apple. BJ lit up and took a deep drag. "So you thought I was the Internet Killer, eh?"

Thinking about what to say to a possible homicidal maniac/roomate, Harley paused. "Well, we did meet on the interwebs and you are from Canada. An officer of the law could reduce that."

She blew smoke into my face, and said, "Deduce?"

"Huh?" I ask, losing my train of thought.

"Deduce," she repeated, "You meant an officer of the law could deduce that?

Stammering something unintelligable, I was glad I'd put my sunglasses back on.

"You a cop?" BJ asked, crushing the cigarette under her boot.

"Gees, no. I was a school safety in the sixth grade. Things like instinct are hard to shake."

"I know, eh. No worries. Besides, me and the family think it's my Uncle Roger. You're safe with me."

Harley nodded and hailed down a cab. Once they were in NY everything would be okay. They'd get a good night's sleep in some trendy writer's hotel. In the morning they'd eat breakfast in some cafe where people read newspapers, then walk over to Penguin Publishing and sell their stories. It would be that easy.

Picking up BJ wasn't that bad. How much worse could things get?

They hopped in the cab, into the night, and New York City quaked with trepidation waiting for their arrival.